Michelle is a mum of 2 currently working as a Ward Sister on 4 South a Respiratory Ward.

She joined Royal Papworth Hospital in 2002 as a newly qualified nurse in Critical Care and worked her way up to become a Sister in 2012.

One of her proudest achievement while working at Royal Papworth Hospital, was becoming a Ward Sister. She loves being able to support staff and understands what it is to be a nurse.

She became a governor to expand on her job role currently, to be able to support the staff outside of her ward and be the voice of nurses within the hospital. 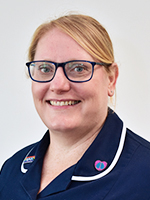 Back to Staff Governors