Our Board of Directors

The Trust is led by a Board of Directors, made up of executive and non-executive members. 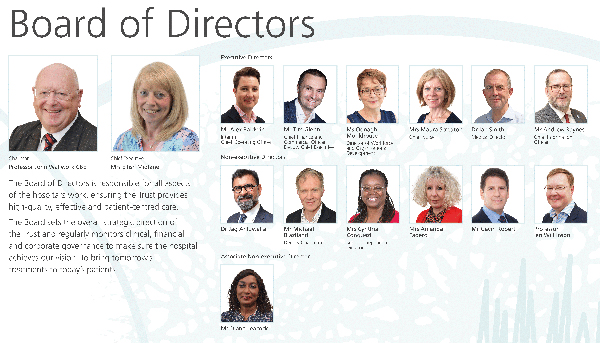 The Chairman may exclude any member of the public from a meeting of the Board of Directors if they are interfering with or preventing the proper conduct of the meeting, or for other special reasons.

The next meeting of the Board of Directors of Royal Papworth Hospital NHS Foundation Trust will be held in public on Thursday 2 February 2023.

Please call Anna Jarvis, Trust Secretary, on 01223 638064 if you plan to attend via Microsoft Teams.

Agendas, past meeting minutes, papers and dates for future meetings can be viewed here.

The purpose of the board is to ensure high standards of clinical and corporate governance, monitor performance and ensure effective financial stewardship.

Our Council of Governors

Back to How we are run