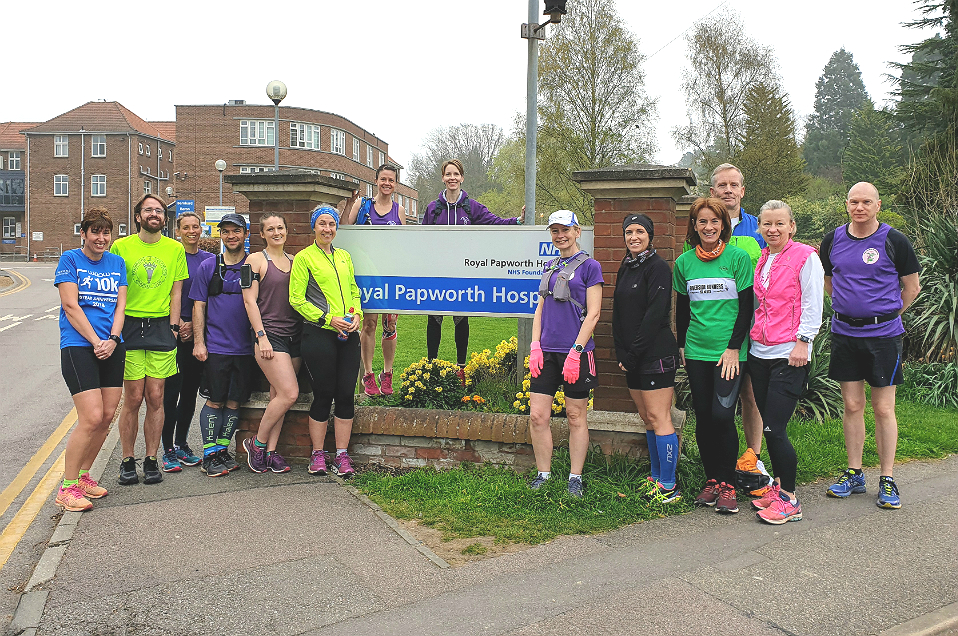 A group of runners – including many Trust staff – took part in a commemorative run last Sunday to mark our hospital move and say goodbye to our current hospital site.

The ‘Royal Papworth to Royal Papworth’ run started outside the main entrance to our hospital in Papworth Everard before going through Cambourne, Hardwick and Coton.

Seventeen miles later, the group posed for a victorious photo outside our new hospital’s south entrance on the Cambridge Biomedical Campus.

The event was organised by pharmacist, Steph Williams, who was also joined by members of Riverside Runners in St Neots and Papworth Runners.

“We made it,” she declared on crossing the finishing line.

“It was a nice journey, mostly on bridleways and footpaths and it was lovely to be accompanied by friends and other members of staff. We’ve all got our medals from Royal Papworth Hospital Charity and we’ve raised £75 in the process, too, just from people putting money into a pot as we ran.”

However, Steph, who lives in Papworth village, admitted: “I don't think it's a realistic commute for when the hospital moves to Cambridge - I’ll be tired at work tomorrow!

“I think everyone has enjoyed their morning, but I won't be repeating the experience anytime soon.”