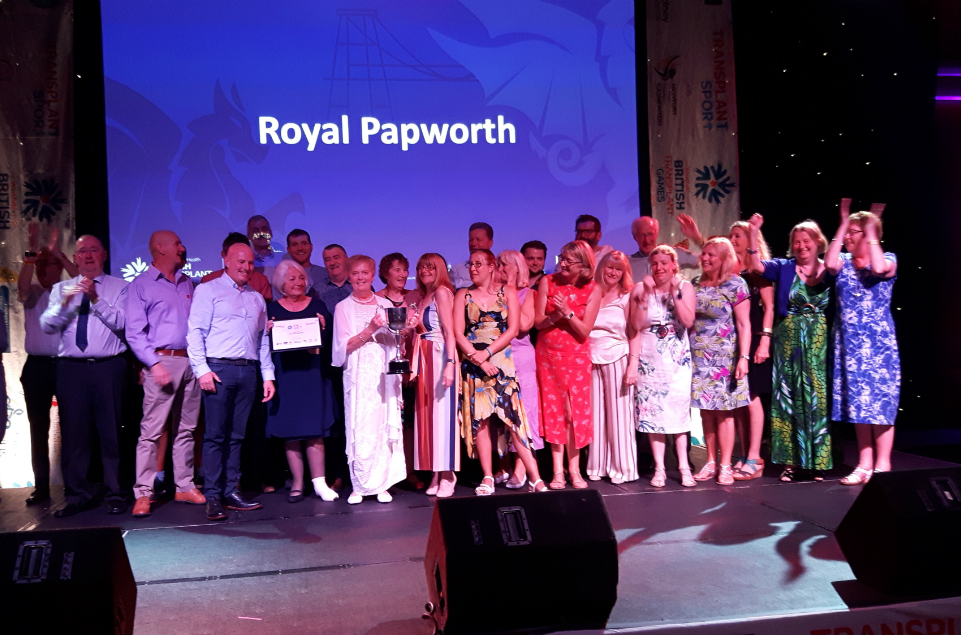 The Royal Papworth Transplant Sport team has once again emerged victorious in the British Transplant Games, with a total of 59 medals.

It is the fourth year in-a-row that the team has claimed the ‘Best Heart and Lungs Hospital’ award at the Games, which this year were held in Newport from 25-28 July.

Led by team manager Maggie Gambrill, it was the biggest-ever squad that the hospital has taken to the competition, with 37 athletes (including 11 new members) claiming 25 golds, 21 silvers and 13 bronzes between them.

Nick Condon also received an individual award for Best Super Senior after winning three gold medals in 100m and 200m track and long jump and a silver in the high jump. Nick had a double lung transplant in 2008 and his strong performance really showcased what can be achieved after transplant.

One of the gold medals was secured by Lesley Burch, who successfully defended her title in the 5km bike time trial. She also took silver in the 100m.

“I was delighted to retain my cycling gold but I couldn’t believe it when I took the silver in the 100m as I’ve never run it before in my life,” Lesley exclaimed.

“It was an amazing weekend. We have an incredible leader in Maggie and the team is just one big family.”

Aidan Fallon, from Stroud in Gloucestershire, had a heart transplant in 2014 after suffering from heart failure due to giant cell myocarditis. He went home with two silvers, both secured on the bike: “I missed the gold in the time trial by one second but I've never felt so strong in the saddle, I’ll take double silver!”

“It was a brilliant performance over the four days by the team”, Maggie - who won three golds herself -  commented. “We have an inspiring team of transplant athletes and I’m so very proud to be the team manager.

“Thank you to Royal Papworth Hospital for their continuing care, support and encouragement.”