Research carried out by the University of Cambridge in collaboration with Royal Papworth Hospital identified patients who are at a higher risk of their lung cancer returning. 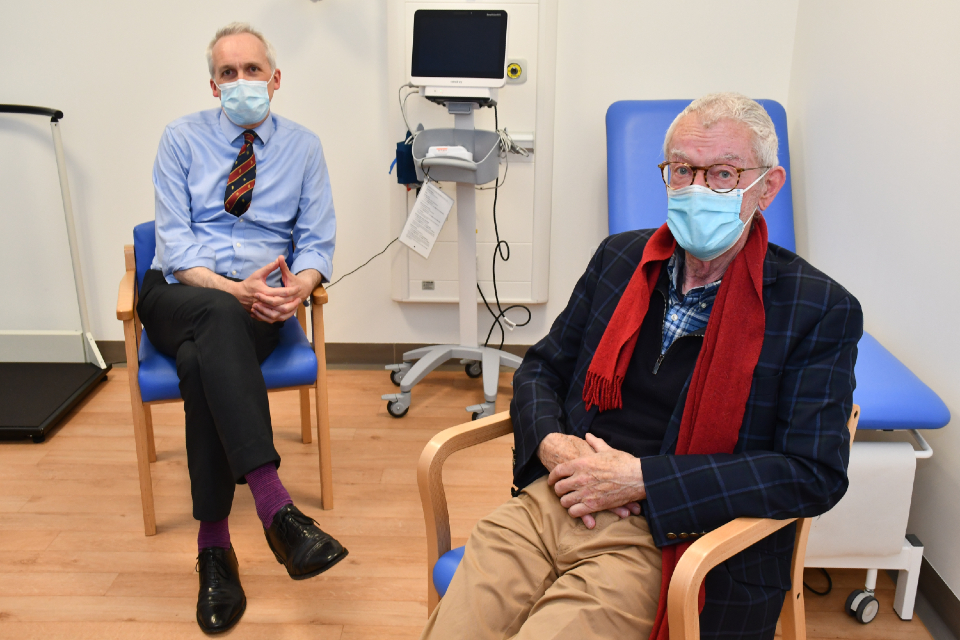 Patients who are at a higher risk of their lung cancer returning can be identified by a personalised blood test that is performed after treatment, according to researchers at the University of Cambridge in collaboration with Royal Papworth Hospital’s research and development team.

Scientists at the Cancer Research UK Cambridge Institute used a personalised blood test for Royal Papworth patients, which is a type of liquid biopsy that can pick up tiny fragments of DNA that are released into the blood as tumours grow.

This DNA, called circulating tumour DNA (ctDNA), can reveal the state of the tumour, its location and potentially its weaknesses, which could be used to select the best treatments.

The results from the Lung Cancer Circulating Tumour DNA (LUCID-DNA) study, funded by Cancer Research UK, have been published today (Thursday 17th March) in the Annals of Oncology.

Many patients who are treated for early-stage non-small cell lung cancer can be cured with either surgery, radiotherapy or sometimes (chemo)radiotherapy.

After treatment, lung cancer patients are carefully followed up with tests including CT scans to find out if the treatment has removed the tumour, but scans won’t pick up tiny quantities of cancer cells known as minimal residual disease (MRD) which could still regrow into further tumours. 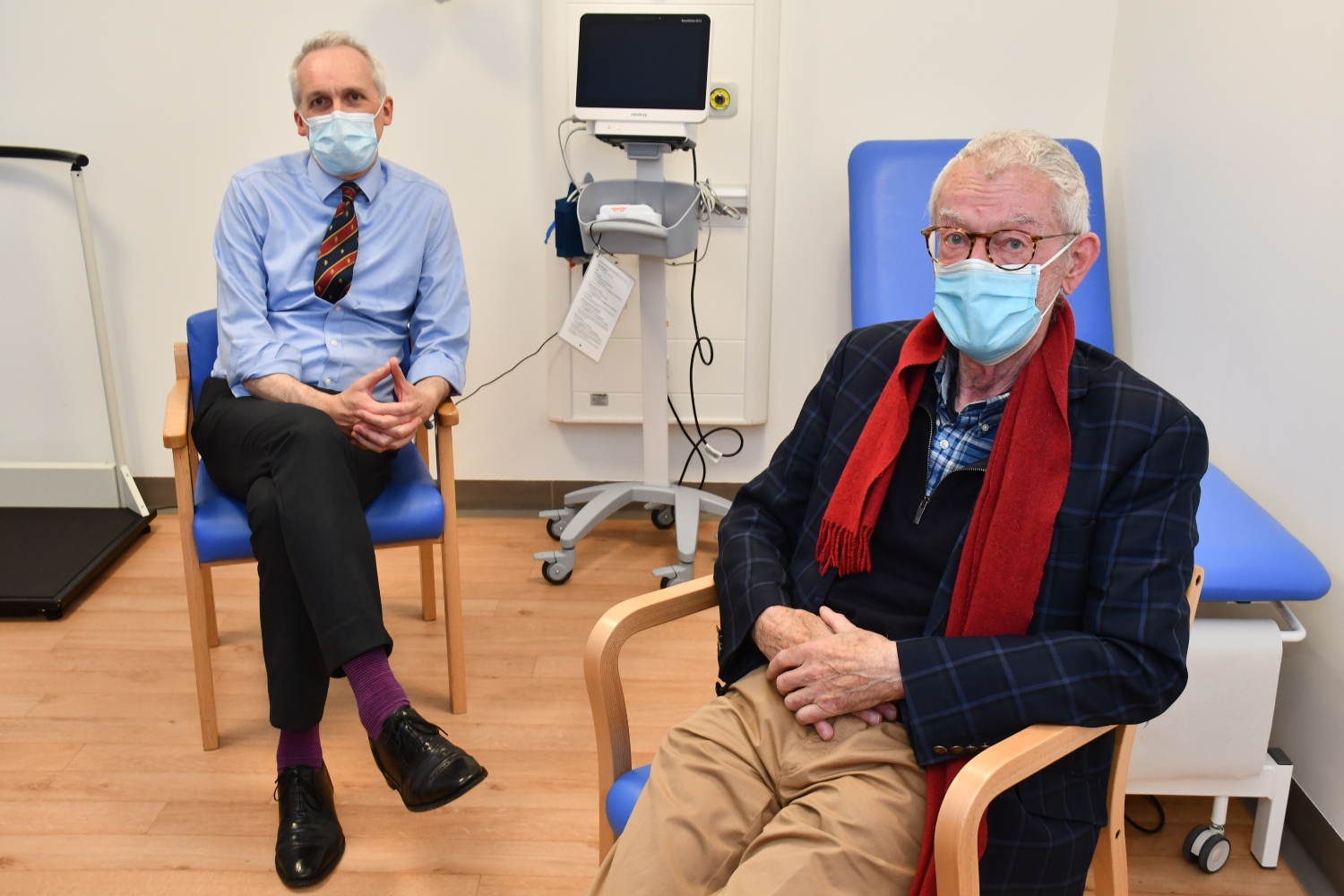 Aart Alders (right) was one of more than 80 Royal Papworth patients recruited to LUCID-DNA. Pictured      here with Prof Robert Rintoul.

By finding signs that lung cancer cells might still be present and active after treatment, using methods such as liquid biopsy, doctors and nurse specialists might be able make better choices about treating patients, aiming to improve the chances of survival for patients who are at higher risk while reducing side effects for patients who are at a lower risk group.

The LUCID-DNA study aimed to find out if circulating DNA can be detected in early stage lung cancers. It used a liquid biopsy, called RaDaR™, which analyses up to 48 different mutations that are unique to each patient’s tumour.

RaDaR™ was developed by Inivata, a biotech company co-founded by Dr Nitzan Rosenfeld, and is based on technologies developed initially by his lab at the Cancer Research UK Cambridge Institute, which is a neighbour of Royal Papworth Hospital on the Cambridge Biomedical Campus.

Dr Nitzan Rosenfeld, group leader at the Cancer Research UK Cambridge Institute, Chief Scientific Officer of Inivata and co-lead author of the study, said: “If cancer cells remain in the body after treatment, a tumour can regrow. If that happens, it is a big setback for patients and the doctors treating them.

“Liquid biopsy can be used to detect tiny amounts of residual cancer after treatment, flagging those patients who have signs that their tumour may not have been eradicated completely with treatment. We’re hoping that this technology could help doctors decide when additional rounds of treatment are needed, and could save lives.”

To find out if liquid biopsy could find lung cancer patients with MRD, the LUCID-DNA study team enrolled 88 patients who were treated at Royal Papworth Hospital and Addenbrooke’s Hospital for early stage non-small cell lung cancer (NSCLC). NSCLC accounts for over 85% of all lung cancer cases.

The research team extracted DNA from tumour samples provided by the patients and sequenced the DNA to find combinations of mutations unique to each patient’s lung cancer. Using this genetic “fingerprint”, Inivata created a blood test which was personalised to the patient’s tumour.

The liquid biopsies were then used to detect tumour DNA in blood samples collected before treatment and for up to nine months after treatment.

The researchers found that patients who had tumour DNA present between two weeks and four months after treatment were much more likely to have their lung cancer come back or to die from it.

Professor Robert Rintoul, Honorary Respiratory Physician and Lead Clinician for Cancer at Royal Papworth Hospital and Professor of Thoracic Oncology at the University of Cambridge was a co-lead author of the study:

“We need to study these liquid biopsies further to find the best ways to deploy them, but these results clearly show that they can potentially be an effective tool to help decide which patients need further treatment.

“Being able to offer patients personalised monitoring and treatment will ultimately save more lives and help us to beat cancer sooner.”

Lung cancer is the third most common type of cancer in the UK. Every year, around 48,500 people are diagnosed with lung cancer and every year around 35,100 people die from the disease in the UK.

“I was first diagnosed with an early-stage lung cancer about five years ago and underwent a surgical operation to remove it,” he said.

“Although some people need further treatment with chemotherapy, I have been very fortunate and my original lung cancer has not returned.

“I was very pleased to be able to help with the LUCID-DNA research study. By trying to develop a blood test to help doctors predict whether a lung cancer might come back or not, we will increase the chance of curing more people.”

Michelle Mitchell, Chief Executive of Cancer Research UK, added: “Lung cancer is one of the biggest killers in the UK. The earlier it is caught, the more likely it is to be treated successfully.

“Detecting signs of cancer before or after treatment without the need for invasive surgery has huge potential for both patients and doctors.

“I look forward to seeing more research that will develop liquid biopsy further, which will ultimately make it much easier for doctors to offer treatment that best matches the patient’s needs, increasing their chance of survival.”