Liam and Sarah became husband and wife in a civil ceremony which took place in the hospital's critical care unit. 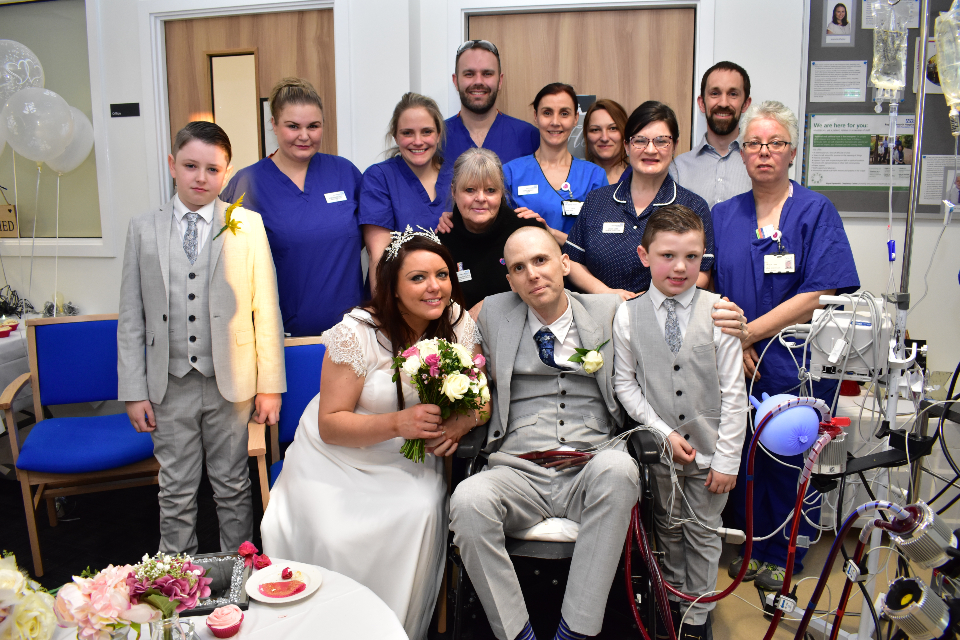 A patient who is currently being cared for in critical care at Royal Papworth Hospital has married his fiancée in the room in which he is being treated.

They were joined by their mothers and Sarah’s two children, 10-year-old Leon and Lyle, 6. Also present in the room was nurse Jenny Beckett, who has looked after Liam for much of his stay in hospital.

The wedding was made possible thanks to the hospital’s critical care team who sourced cakes, flowers and food for the blessing in the hospital’s chapel after the service.

Liam is currently on a BiVAD (biventricular assist device), which is supporting his failing heart. The machine works by helping to pump blood out of his heart’s ventricles and around his body.

“Liam was admitted to the Princess Alexandra Hospital in Harlow in mid-January,” said Sarah, 32.

“From there we came to Royal Papworth and have been here ever since. We got engaged here, too, on Saturday 1 February, so it’s all happened very quickly.

“Liam is currently waiting to be put on the heart transplant waiting list, and so we could wait until a potential transplant happens and have the wedding then. But Liam’s condition just made us think ‘life is too short, let’s just do it’, and as he is being supported by a BiVAD device that meant having the wedding here at Royal Papworth.

“The nurses on critical care have been amazing. If we were to get married elsewhere in future we would probably invite them anyway, so it made sense to just go ahead with it.”

The civil ceremony was followed by a blessing in the hospital’s chapel and multifaith area, conducted by chaplain Revd Anthony Gill.

As well as hospital staff, relatives of other patients who have befriended Liam and Sarah were also in attendance for the wedding.

The couple would like to say a huge thank you to the following people and organisations for their amazing help in making the wedding happen at short notice, offering the following free of charge:

Royal Papworth Hospital is the UK’s leading heart and lung hospital. Having performed the UK’s first successful heart transplant in 1979, the hospital now performs more heart and lung transplants each year than any other UK centre.