Mr Coonar qualified as a doctor in London. His general surgery and cardiothoracic surgery training was at Guy's, St Thomas's, King's, Royal Brompton and the London Chest Hospitals.

In 2005-2007, Mr Coonar worked at the Toronto General Hospital in Canada and took fellowships in general thoracic surgery and lung transplant surgery.

Mr Coonar has been a consultant at Royal Papworth Hospital since 2007 and his practice is in pure thoracic surgery. He works closely with a large team including other surgeons, specialist nurses, radiologists and physicians.

Mr Coonar was appointed President of the Royal Society of Medicine Cardiothoracic Section in December 2013.

He handles benign diseases and cancer. His main clinical interests are:

Mr Coonar has published several research papers and book chapters, some of which have received awards. 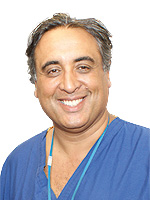 Local principle investigator for the PULMICC Trial - a randomised control trial of resection of bowel cancer metastases versus observation.

Back to Consultant profiles