Annabelle, who was born on Wednesday 30 January, is likely to be the final baby born at Royal Papworth’s current site in Papworth Everard 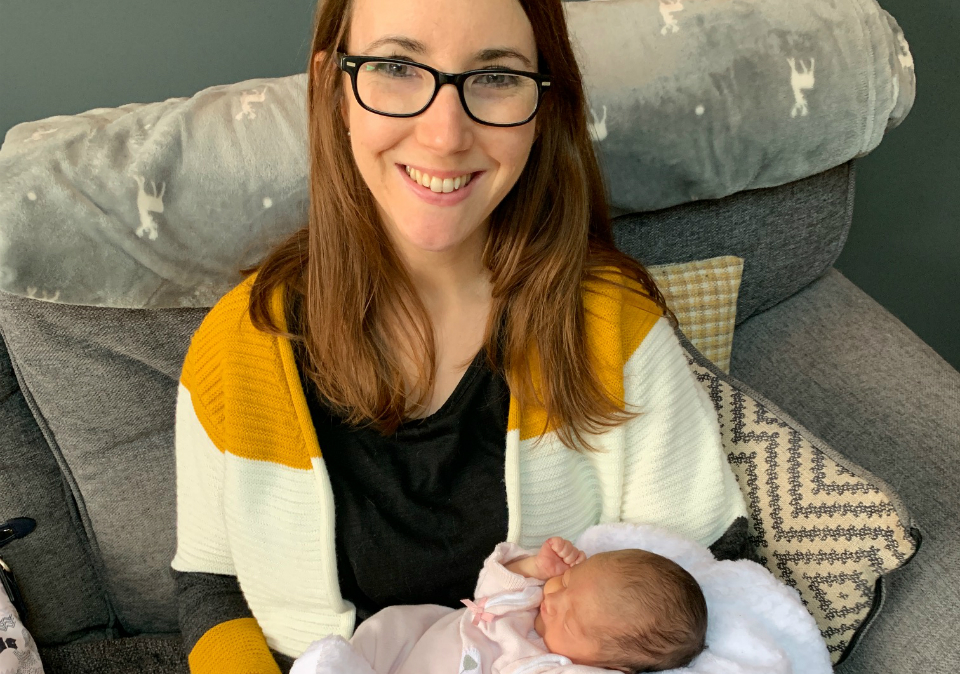 Weighing just 3lbs 9ozs, Annabelle was eight weeks premature when she was born in January.

Her mum, Tiffany, had been admitted to the Rosie Hospital in Cambridge a couple of weeks previously, before being transferred to the Intensive Care Unit at Royal Papworth Hospital.

“It all happened so quickly, but I knew I was in the best hands”, Tiffany, who is 32 and lives in Somersham, Cambridgeshire, recalled.

She and husband Stewart found out they were to become parents for the first time in July 2018 and the pregnancy progressed as normal, until December.

Tiffany was fitted with a bovine tissue mitral valve 10 years ago after contracting bacterial endocarditis, a rare infection that affected her valve. She went for a routine check-up of her heart when five months pregnant and it was then that things started to change.

“I was told that my valve had started degenerating,” said Tiffany, “so I was told to slow down and reduce the amount of exercise I was doing. By the start of January I felt ok and was still working.

“I was being monitored weekly and went to the Rosie for an appointment when I was told that I needed bed rest and wouldn’t be going home until after I had the baby as it would be too risky. To be told that was very difficult to come to terms with.”

Tiffany needed to give birth at Royal Papworth in case her valve needed replacing during the caesarean section, but as her condition worsened and the pressure increased on her heart, the operation was brought forward by nine days.

At 30 weeks pregnant, she was transferred by ambulance from Cambridge to Papworth Everard and the following day Annabelle was born.

“I got 10 minutes with Annabelle whilst in theatre but was still quite groggy, and then she needed to be quickly transferred back to Addenbrooke’s by ANTS (Acute Neonatal Transfer Service) to be cared for in the Neonatal Intensive Care Unit.

“It’s been a really tough few weeks with Annabelle not being home, but at four-weeks old, on the 3 March, she was discharged a month before her original due date.

“She’s putting on weight well and is now up to 4lb 6ozs. It’s so lovely to have her home.

“There were some tough times in the past couple of months but I can’t thank all of the staff involved in my care highly enough. They have been absolutely amazing. I’ll need surgery in the future to replace my valve, but for now we are just enjoying being a family three.”

Dr Guillermo Martinez, Consultant Anaesthetist at Royal Papworth Hospital, said: “There were about 25 people involved in the preparation and delivery of Annabelle, including obstetric consultants, a Neonatal team, a midwife, the ANTS team and anaesthetists from both the Rosie and Royal Papworth. We also had the ECMO (extracorporeal membrane oxygenation) team and a cardiac surgeon on standby.

“We had to make quick, but safe, decisions throughout. For example, if Tiffany needed emergency surgery she would have been at Royal Papworth for at least a week and not able to see her daughter, but instead we were able to wake her up and let her meet and hold  Annabelle, just before she was transferred to the Rosie.

“This was a perfect example of Royal Papworth and Cambridge University Hospitals staff working together in complete harmony, deploying their expertise with high precision, and it’s wonderful to know that Annabelle is now home with her family and doing well.”