A new BBC documentary, exploring the past, present and future of Royal Papworth Hospital is due to be screened this month. (15 June 2018) 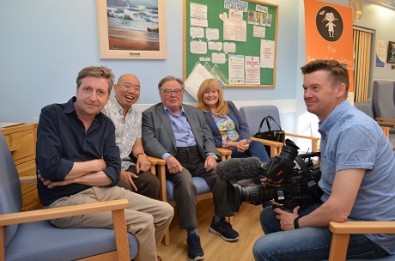 Filmed earlier this year to mark the 70th anniversary of the NHS, ‘How the NHS Changed Our World: Royal Papworth Hospital’ is one of a series of programmes celebrating the work of five pioneering centres in the UK.

In the 30-minute programme, presenter Dr Giles Yeo – ‘Trust Me, I’m a Doctor’, ‘Britain's Fat Fight with Hugh Fearnley-Whittingstall’ - looks back at the UK’s first successful heart transplant at the hospital in 1979, and the media frenzy that surrounded patient Keith Castle.

Among the Royal Papworth patients involved were Sandy Law – the world’s longest surviving heart transplant patient – and TV comedian Eddie Large, who also received a heart transplant at the hospital.

Professor John Wallwork, former transplant surgeon, and now chairman of Royal Papworth Hospital, said: “There was huge interest in the first patients to receive new hearts and lungs at the hospital, and rightly so – they were involved in an extraordinary procedure. They were very special patients - not that all our patients aren’t special - but those ones at the beginning were particularly brave.

“Now, hundreds of transplants later, the operation has become more procedural and the focus of the hospital is on new innovations to keep those patients fit and healthy for even longer post-transplant, and ensure they carry on enjoying their second chance at life.”

Diane Hare, producer, said: “With the NHS at 70 and Royal Papworth also celebrating its centenary this year it’s a fitting time to celebrate their achievements. Heart transplants seemed like an impossible dream 70 years ago when the NHS began. It was the pioneering work and determination of staff and patients at Papworth that made that dream reality.”

The programme will be shown on BBC1 - BBC Cambridgeshire East only - at 1900 on Wednesday 20 June. It will be shown again at 1900 on Monday 25 June on BBC2, with the rest of the series following it that week.