John Curtis, who has been treated at Royal Papworth since 2014, says he was 'blown away' by the new hospital's facilities 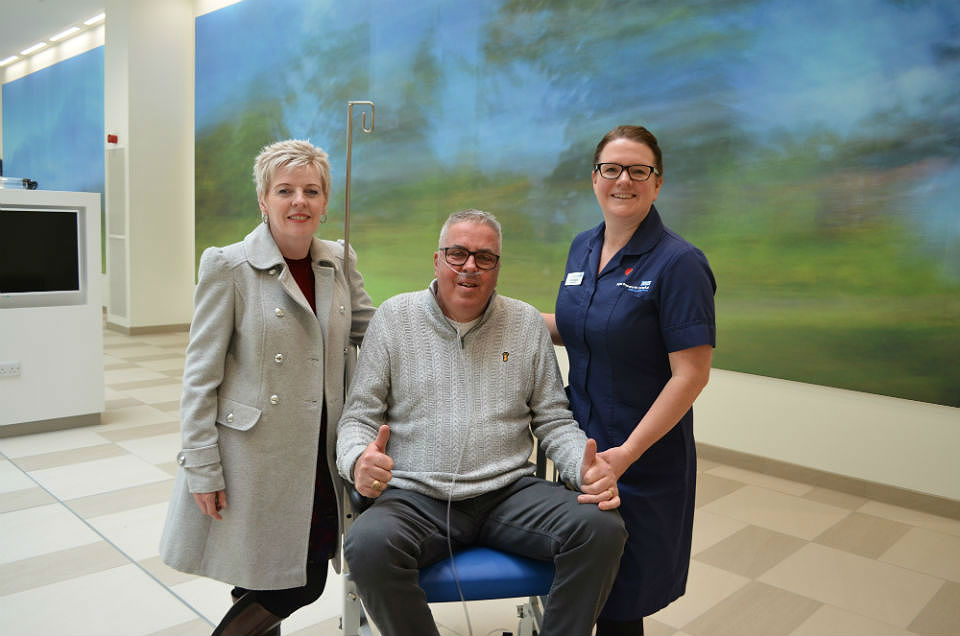 The first Royal Papworth patient to be given a tour of our new hospital on the Cambridge Biomedical Campus says he was ‘blown away’ by the facilities.

John Curtis, who is 53, has a rare lung condition called Alpha-1 and therefore largely relies on a wheelchair to move around.

He became the first of Royal Papworth’s patients to have a look inside the new building when was shown around by Chief Nurse, Josie Rudman, on Friday 25 January.

“The first thing that was waiting for me when I came through the front door was these wheelchairs,” John said. “It may sound like a small thing but someone has really thought about it and that makes such a difference to people like me.

“Because I can’t breathe very well, if I don’t have somewhere to sit I’m immediately uncomfortable, but I don’t have to worry about that here.”

John has been a patient at Royal Papworth since 2014, visiting Thoracic Outpatients on a weekly basis.

He has in the past been admitted for a four-month stay in hospital and believes the move to Cambridge will hugely benefit the care that patients receive.

“At the moment you share a ward with as many as six or eight other people. There’s not a lot of privacy and you have a shared bathroom. This is like turning left on an aeroplane, it’s just first class and the bedrooms are better than what I had in my first flat!

“Being able to see the outside world through the big glass windows is really important. And the glass doors are a brilliant idea because the nurses can walk past at a glance and see that we are ok and we can get their attention, but we still have the privacy of curtains when needed.

"When I first heard we were moving I was concerned that the family atmosphere and culture we have in Papworth was going to be lost, but it's the people that make Royal Papworth and the people are coming with us.

“I know this is silly to say, but I can’t wait for my next planned admission because I want to experience it properly. Patients are going to feel really safe in here.”