Lung transplant to feature in next episode of BBC documentary series ‘Surgeons: At the Edge of Life’ 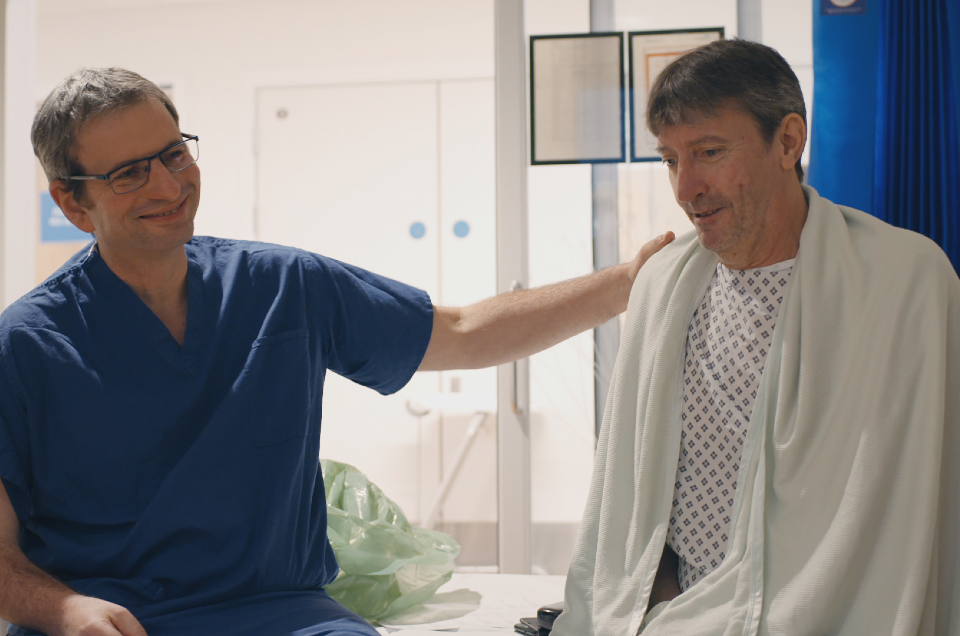 ‘We’ve got a set of lungs for you and we’re coming to pick you up,’ spoke the voice at the other end of the phone.

The words belonged to a transplant nurse at Royal Papworth Hospital: the phone to David Halsey, a father-of-two from Devon who was awaiting a life-saving double lung transplant.

“It was 07:00 and I was at my sister Kay’s house in London,” David recalled. “It was an emotional time because we had just been at my older brother Geoffrey’s funeral the previous day after he died from cancer.”

David and his siblings have been through a lot. Three years beforehand the eldest of the four of them, Robert, had died from a rare lung condition called Alpha-1 antitrypsin deficiency (AATD).

David and Kay also have the condition, which is inherited.

AATD is a rare, inherited condition affecting the lungs and/or liver

AATD is when someone has a lack of the protein alpha-1 antitrypsin (AAT) which is produced in the liver. The main job of AAT is to protect the lungs and a deficiency can lead to fatal lung disease.

“A lot of people that have AATD don’t realise they have it because they can remain healthy,” David said. “My older brother Robert had it and so does my sister, Kay.

“Robert died in 2017. He was actually on the lung transplant waiting list at another hospital but after a couple of false alarms he then took himself off the list and his health deteriorated. Kay, thankfully, is healthy and doesn’t need a transplant.

“I have the same strain as Kay, but mine was made worse because I used to smoke and was a plasterer for 35 years. It got to the stage in August 2017 when I had to give up work because I couldn’t get upstairs, never mind lift a bag of cement.”

David and Kay both have AATD, a condition from which their older brother Robert died three years ago

Due to David’s lungs not being as well protected because of AATD, he developed chronic obstructive pulmonary disease (COPD), sarcoidosis and blood clots, giving him a poor quality of life and a prognosis of just a couple of years left to live.

His doctor at Royal Devon and Exeter Hospital recommended him for a lung transplant. After the first centre rejected David’s application, he and his doctor turned to Royal Papworth in Cambridge, which is the UK’s leading heart and lung hospital.

“Royal Papworth said yes and I came to Cambridge and had all the tests in the summer of 2019, which I passed,” David recalled.

“It was such a relief to get accepted and then I began my wait for a donated set of lungs. I thought I would be waiting for more than a year but after just five months I got my first call to say I’d been matched to a donor.”

David's lung transplant was one of 41 at Royal Papworth Hospital in 2019/20, the most of any UK centre

David’s operation was performed by Mr Marius Berman, Surgical Lead for Transplant at Royal Papworth Hospital. Mr Berman appears in the BBC Two programme alongside David and footage from the operation, which was captured on rigged cameras inside the operating theatre.

In 2019/20, Royal Papworth was the largest cardiothoracic transplant unit in UK, with a total of 80 heart, lung and heart-lung transplants according to NHS Blood and Transplant figures.

David’s lung transplant was one of 41 performed by Royal Papworth teams in the year, also the most of any UK centre.

“We also had the lowest decline rate, which means we are the most likely to accept organs for donation, as David experienced with getting his call so soon into his wait for a life-saving transplant,” said Mr. Berman

“This was only possible because someone had made the decision to donate their organs and had shared their wish with their family, so that David’s life and others like him could be saved.”

“This ‘Surgeons’ episode gives only a small glimpse into the journey David undertook and we should bear in mind the work of so many others involved in organ donation, retrieval, transplantation and the continuing care after surgery.” 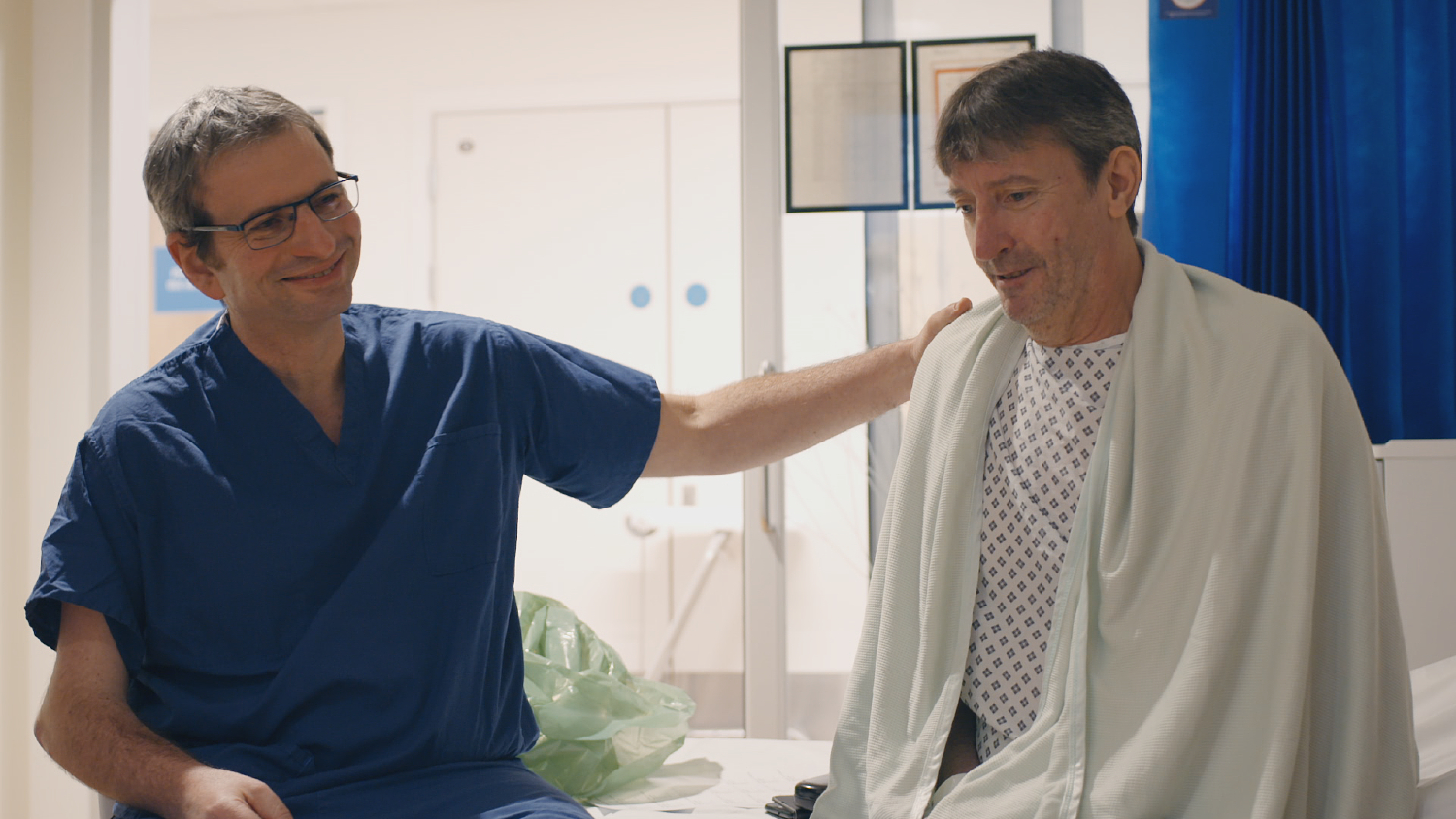 “We are very grateful to David for sharing his story and allowing the country to see the work of our teams here at Royal Papworth,” said Dr Christi Burt, who was the consultant anaesthetist in David’s operation.

“We hope it inspires other people to talk about organ donation and have those conversations with their family so that more lives can be saved.”

“I’d watched the previous two series of ‘Surgeons’ and had been holding out to see a double lung transplant, knowing that is what I would eventually need,” added David.

“When I was contacted to see if I’d be happy to have my operation filmed, I was only too happy to be involved. I’m very grateful to Royal Papworth Hospital, and to my donor and their family, for allowing me a second chance at life and a future with my daughter, Cally, and son, Jamie.”

John Forsythe, Medical Director for Organ Donation and Transplantation at NHSBT said: “It’s wonderful to see David receiving his transplant and great to see his life transformed. It’s thanks to the generosity of families who agree to organ donation at such a tragic time and the skills of the teams performing the transplant that people like David have a second chance at life.

“We hope that now England has implemented Max and Keira’s law – the new legislation for organ donation – we will see more people and families agreeing to donation, enabling more lifesaving transplants like David’s to take place.

“Sadly someone in the UK dies every day in need of an organ transplant while more than 1,000 families say no to organ donation every year. Even under the new law, our Specialist Nurses will still speak with a potential donor’s family. It remains vital that people continue to have conversations with their family, to remove any uncertainty and offer peace of mind for those who find themselves facing the tragic loss of a loved one.”

The programme was jointly-filmed at Royal Papworth and Addenbrooke's hospitals, which are both based on the Cambridge Biomedical Campus. Episode three will also show a cavernoma operation from Addenbrooke's.

Episode three of ‘Surgeons: At the Edge of Life’ will be broadcast on Tuesday 20 October at 21:00 on BBC Two.