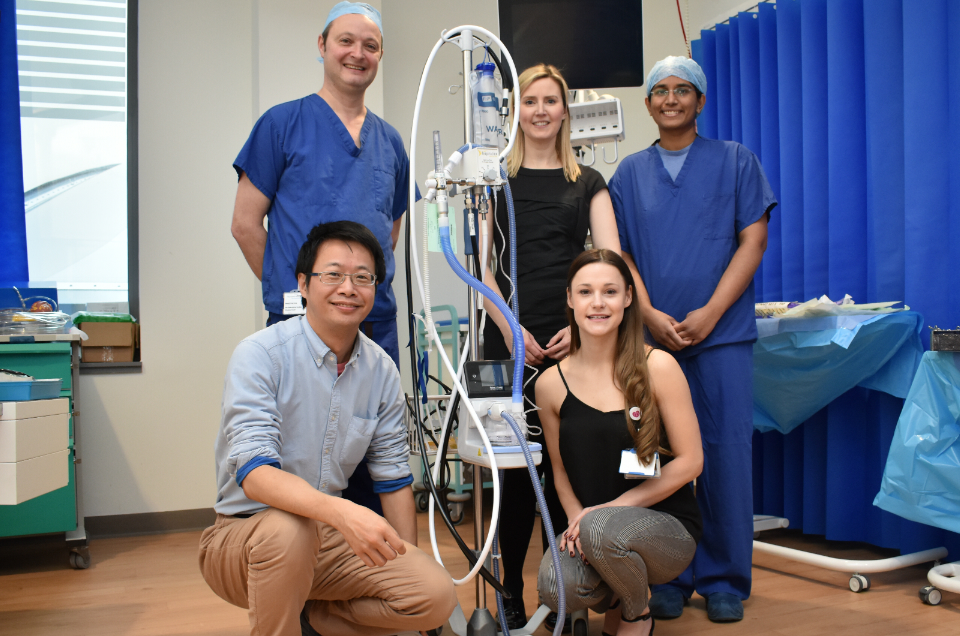 Royal Papworth Hospital will lead a new multi-centre study after being awarded £1.4 million of funding.

The funding has been provided by the National Institute for Health Research (NIHR) and comes after a pilot study three years ago, which studied 100 patients at Royal Papworth. It found that patients were discharged quicker from hospital and re-admitted less frequently to intensive care after cardiac surgery.

This grant will fund the study in 10 cardiac surgery centres in the UK, incorporating almost 1,000 patients, to further establish the technique’s clinical effectiveness and positive impact on patient rehabilitation.

“When cardiac patients have an operation, which involves opening up their chest wall, it can be painful to breathe deeply for a short time afterwards,” explained Professor Andrew Klein, Consultant Anaesthetist at Royal Papworth Hospital.

“If a patient has a pre-existing lung disease like asthma then this becomes even more difficult.

“The high-flow device allows the lungs to inflate more fully and re-expand because a larger volume of air is being forced into the lungs – up to 60 litres per minute. This quantity has been chosen because other studies analysing high-flow have shown that 50-60 litres is the optimum amount.

“This not only allows a patient to breathe more deeply but also reduces infection and is more comfortable for patients because the air is humidified and warmed to 40 degrees Celsius. The key thing here is that we are not increasing the concentration of the oxygen, just the flow.”

Some of the patients who have already been placed on high-flow post-cardiac surgery have been involved in designing the study.

One of those patients is 72-year-old Geoff Brown, from Peterborough, who had a triple heart bypass in February 2016. An asthma sufferer, he was placed on high-flow for the first 22 hours after his operation.

“I went into the anaesthetic room for my operation at 16:30 on a Tuesday. By 10:00 the following day I had been moved from Critical Care to a general ward and a few days later, on the Saturday afternoon, I was discharged back home,” Geoff recalled.

“I thought I’d be in hospital for at least a week, so to be out within four days was amazing and I felt very good throughout my whole recovery.

“I’m now part of the committee that has been involved in conference calls, meetings and written correspondence to take this study to the next phase. It’s a fascinating subject and if it helps others to recover like I did then it can only be a good thing.”

Val, Geoff’s wife, added: “We had said we were interested when asked about high-flow at the pre-operation meeting but there was no guarantee it would be used for Geoff's treatment. We found out it had been used about 18 months after Geoff’s operation when we were invited to take the study further.

“It was amazing seeing Geoff in hospital just after his operation. I went along with our youngest son on the Wednesday lunchtime to see him. It hadn’t yet been 24 hours but he was already sitting up and talking, breathing incredibly well and he had no shortage of breath at all. We joked about whether he had actually had the operation!”

Melissa Earwaker is trial manager for the study: “It is brilliant to receive this money from the NIHR to develop the high-flow study even further from the original cohort of 100 patients where we achieved some wonderful results.

“In that initial study we found that a patient’s length of stay in hospital decreased by a third, improving their recovery and safety. Additionally, it helps to free up bed space in both critical care and on the wards, therefore saving the Trust money and allowing us to treat more patients.

“This larger study will be run by the Royal Papworth Clinical Trials Unit for the next three years and will begin in spring 2020.”