“People say that moving house on its own is stressful enough, well, just before Mike had his heart attack we had put our house on the market" 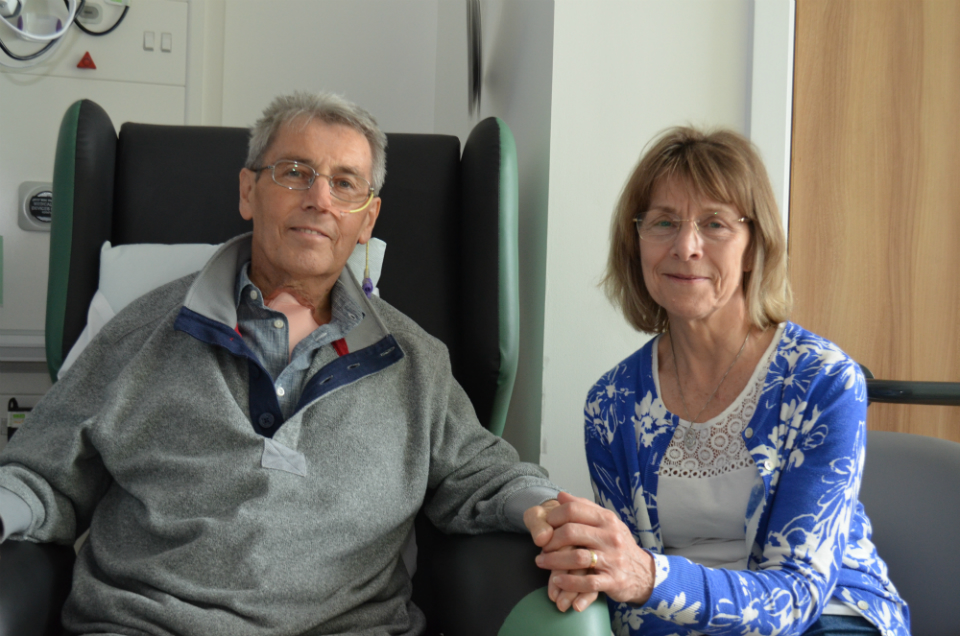 Tuesday 5 February started like any normal day for Mike Stickland: a walk with his wife and their dogs.

A 63-year-old, non-smoker, very occasional drinker who was not overweight and quite fit, there were no symptoms of what was to happen later that day.

“He was a little breathless on the walk, but carried on as normal”, wife Ginny recalled. “He went to the dentist as planned that afternoon but knew something wasn’t right.

“When he came home we called an ambulance. He was first taken to Salisbury Hospital before being transferred to Southampton General.”

“Mike was seriously ill. We weren’t even sure if he would make the initial journey from Southampton to Papworth,” Ginny said.

“He started to improve after the procedure to address the hole in his heart, but it’s been a rollercoaster ride. Mike started to do physio and was told that once he could walk a circuit of the ward they would consider him for a heart transplant.

“With the tremendous help, support and encouragement of the wonderful physios and nurses, Mike achieved the required level of fitness, which was quite unbelievable with all the heavy tubes coming out of his body and after all he had been through.”

Mike was placed onto the super urgent transplant list and after 33 days received the precious gift of a donated heart, a couple of days after being one of the first patients to be transferred to Royal Papworth’s new hospital.

In the process he became the first person to undergo a transplant at the new site, adding to the thousands of heart and/or lung transplants that have taken place during the past 40 years at the hospital’s old site.

He is now making good progress in his recovery and when he is discharged from Royal Papworth will be heading back to a new home on the south coast.

“People say that moving house on its own is stressful enough, well, just before Mike had his heart attack we had put our house on the market! Thanks to my sister and brother the sale has now gone through and Mike can say that not only does he have a new heart in a new hospital, he also has a new home to go back to.

“We will never be able to fully express the deep gratitude we and our family feel for Mike’s care. Thanks to the generosity of his donor Mike has been given a second chance at life. Words cannot convey how grateful we all are to that person, their family, and the dedicated team at Royal Papworth.”

Mike’s transplant operation was performed by Mrs Catherine Sudarshan: “Mr Stickland was very unwell at the time of transfer to Royal Papworth Hospital and would not have survived long without immediate intervention.

“Not only is Mr Stickland the first transplant, this was also the first operation that I performed at the new site. As I have joked with Mr Stickland, I am the only woman to have literally touched both his old and current hearts! It is a real joy to see him make such great progress.”