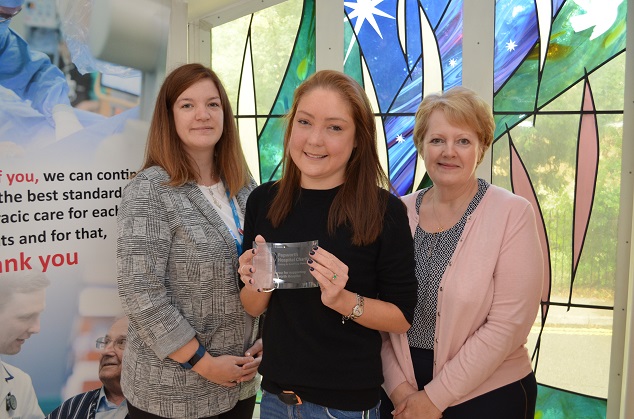 Pippa Kent, who last April received two new lungs at Royal Papworth Hospital, has raised more than £1,800 for the hospital charity as part of her bid to crowdfund a cookbook for fellow transplant patients.

The 29-year-old, who has Cystic Fibrosis, appeared in several national newspapers promoting the project earlier this year. She managed to raise an amazing £30k, but was still short of the £56k needed to have the book published when time ran out on the 60-day Kickstarter campaign.

However, many of those who pledged money were still keen that several charities set to benefit from the project – including Papworth Hospital Charity – received a donation.

And Pippa was back at the hospital recently to present the money she raised on behalf of Now What Can I Eat?

She said: “We had a late flurry of donations, but sadly we just ran out of time. But I’m glad I’m still able to help donate some funds to Royal Papworth, to help with all of the amazing work they do.”

And Pippa hasn’t given up on her ambition to produce the cookbook – which would be full of delicious recipes, all 100% immune suppression friendly - and is exploring other avenues to publication.