After a week of treating people in our new hospital, patients have been sharing their experiences. 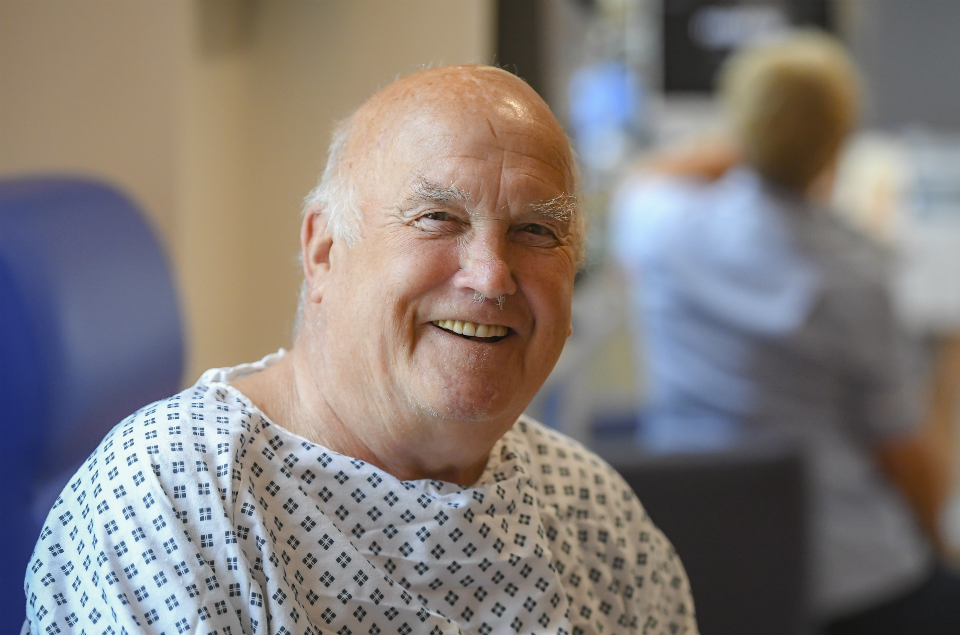 Royal Papworth Hospital has now been treating patients at its new home on the Cambridge Biomedical Campus for a week, with one of the first patients through the door describing his care as “fabulous” and “phenomenal”.

Michael Badcock, who is 76 and from Soham, was one of the first cardiology patients to be treated.

He was fitted with four stents after suffering from angina last summer, and was well enough to be sent home later the same day.

“I had a severe burn in my chest whenever I was doing anything that was physically exerting,” he recalled. “First I would feel breathless and then it would put me on my knees.

“I had two stents fitted back in January but needed a further four today.

“Everything that was going to happen to me was explained clearly. I was given a choice between a bypass or stents, was told what would happen in both cases, and I opted for stents.

“I felt privileged to be one of the first, I had no doubts whatsoever.

“The hospital is absolutely enormous and looks fabulous. The care I’ve received has been phenomenal as usual, and that care combined with this new hospital can only be a positive for patients like me.”

His procedure was performed by Dr Michael O'Sullivan, who commented: “The new facilities are fabulous and will provide us with the opportunity to provide better care for our patients more efficiently.

"We have been delighted with how smoothly the move has gone and how quickly the clinical team has adapted to their new working environment.”

The first bronchoscopy also took place at the new hospital on the same day, with six emergency heart attack admissions within the first 24 hours.

And on Saturday 4 May, all 48 inpatients were moved across from our old hospital in Papworth Everard to our new home – 39 ward inpatients and nine from Critical Care.

One of those who was transferred was 29-year-old Alex Charlesworth. Alex is being treated for pulmonary hypertension, which is high blood pressure in the blood vessels that supply the lungs. It’s a serious condition that can damage the right side of the heart, as it has to work harder to pump blood through the arteries.

“I was admitted to Royal Papworth on 23 April,” she said, “having gone to my local hospital in Essex with symptoms of PH back in December.

“I was the last patient on Princess Ward in the old hospital, but only for about 10 minutes, before going in a wheelchair into the back of an ambulance and a very smooth journey across to the new hospital.

“It’s been very interesting going from one to another. I had a side room at the old site but these new rooms with my own space and own en-suite is lovely, with views of Cambridge out of the window.

“The food has been great and having a TV is very good as well – it’s been a good experience so far. I even accidentally called it a hotel rather than a hospital!”

Kelvin Hill, from Rushden in Northamptonshire, attended a transplant outpatient appointment during the first week.

“The traffic was absolutely clear so I got here about two hours before my appointment and went for a walk around the hospital and the campus,” said the 43-year-old, who had a heart-lung transplant at Royal Papworth in 2014.

“It’s lovely here, there’s a lot more room. I do love the old site, it wasn’t too far from me so it’s a bit longer to drive here, but the drive was great and in future I’m going to be getting the guided bus from St Ives which drops me off right outside the hospital. My first visit has been really positive.”