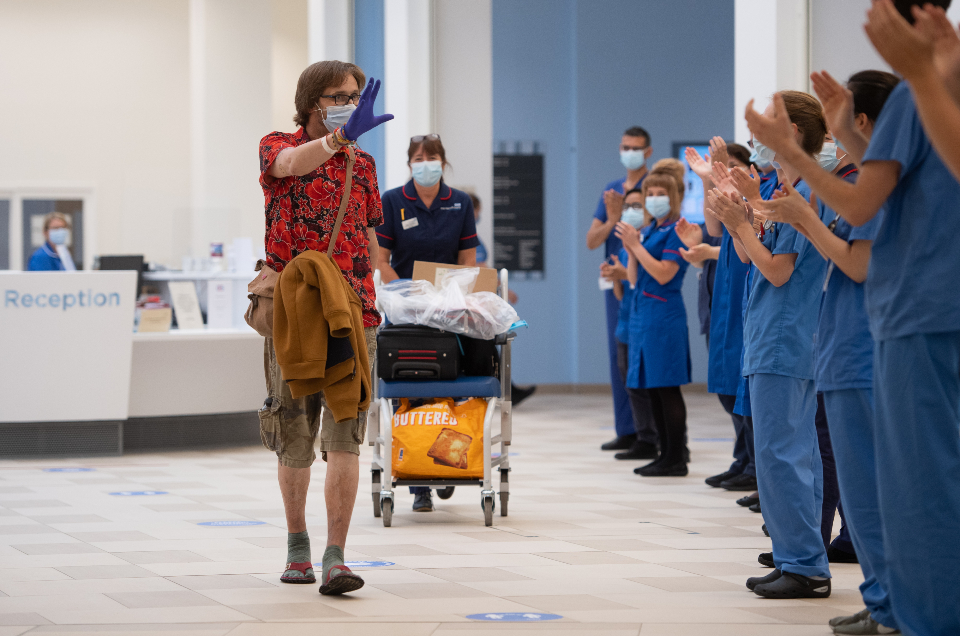 When Richard Priest was admitted to Royal Papworth Hospital on New Year’s Eve, little did he think he’d still be in hospital come August.

And little did anyone imagine the changes that would happen to the outside world in those eight intervening months, as he steps foot into a very different society from the one he last saw at the end of 2019.

“A lot has happened since I was in the outside world,” Richard said. “But I’m feeling ok about heading home. I’ve been wearing a mask and gloves when I’ve needed to in hospital and all the staff have been in their PPE while I’ve been shielding, so I’m not too apprehensive about it.”

Richard, 54, was preparing to celebrate the New Year with his wife and daughter at their home in Bury St Edmunds, Suffolk, when he was brought to the hospital in Cambridge on 31 December to manage his condition, restrictive cardiomyopathy, which was diagnosed in 2004. This is when the heart’s ventricles become stiff and thick, meaning the heart doesn’t fill with as much blood as normal. 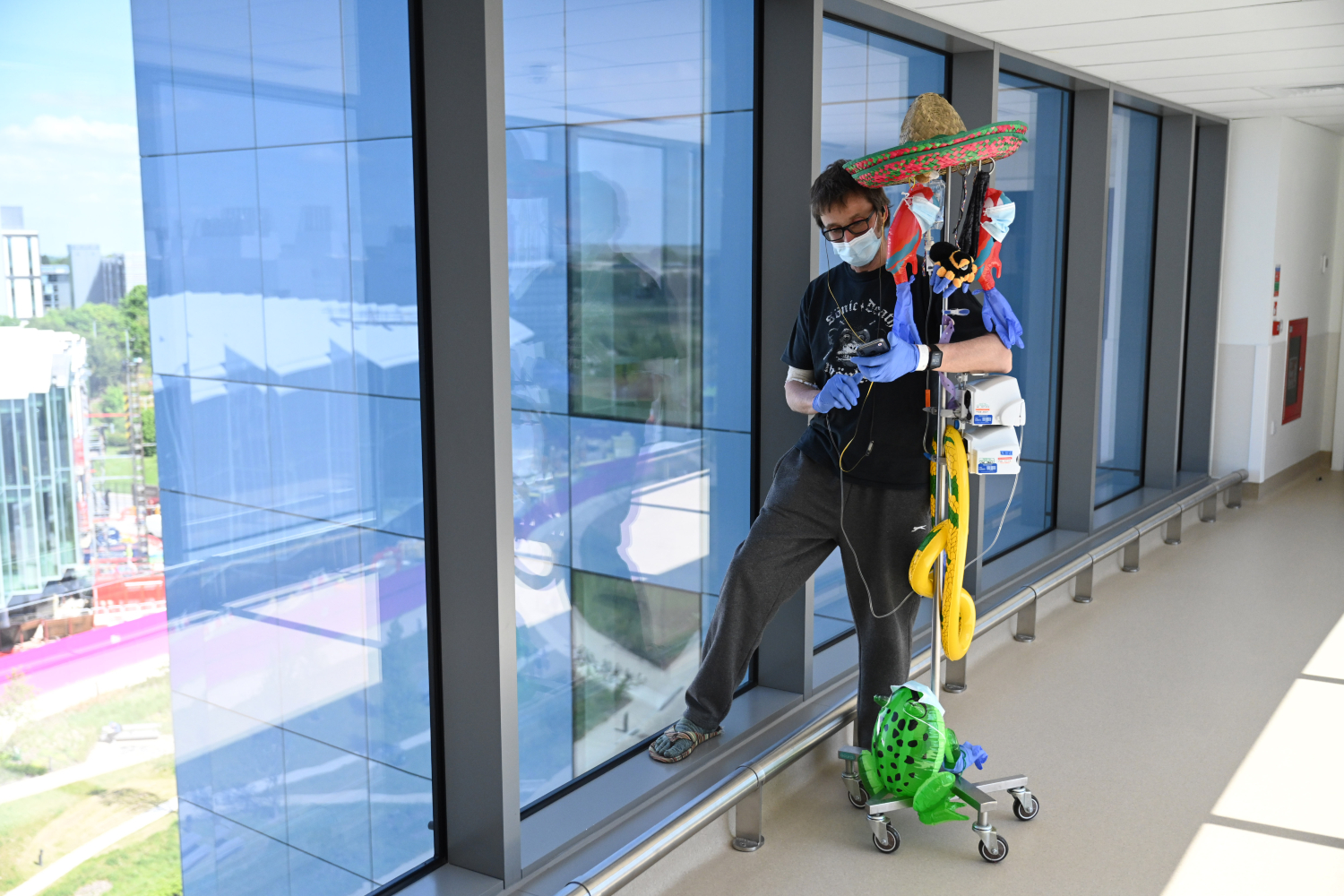 Richard pictured back in May while he was still waiting for his life-saving heart transplant. The inflatable animals were his lucky mascots.

He has been in hospital ever since then to ensure he remained stable and fit for transplant should he get the call that a suitable heart was available. That call came in March, before the country entered lockdown, but turned out to be a false alarm.

The number of heart transplants then reduced significantly during the rest of March, April and May when critical care beds were full with patients battling coronavirus (COVID-19).

“It got to the point where I had been in hospital so long, about five months in, I didn’t want to make friends with any other transplant patients. I didn’t want them to come in first and then leave before me as I knew I’d feel resentful.

“That was hard, feeling that way, as it wasn’t anyone’s fault and I’d previously, before lockdown, been happy to meet with other transplant patients and talk through our experiences. That was one of a few wobbly moments I’ve had during my time here, wondering if I would ever get that call again. 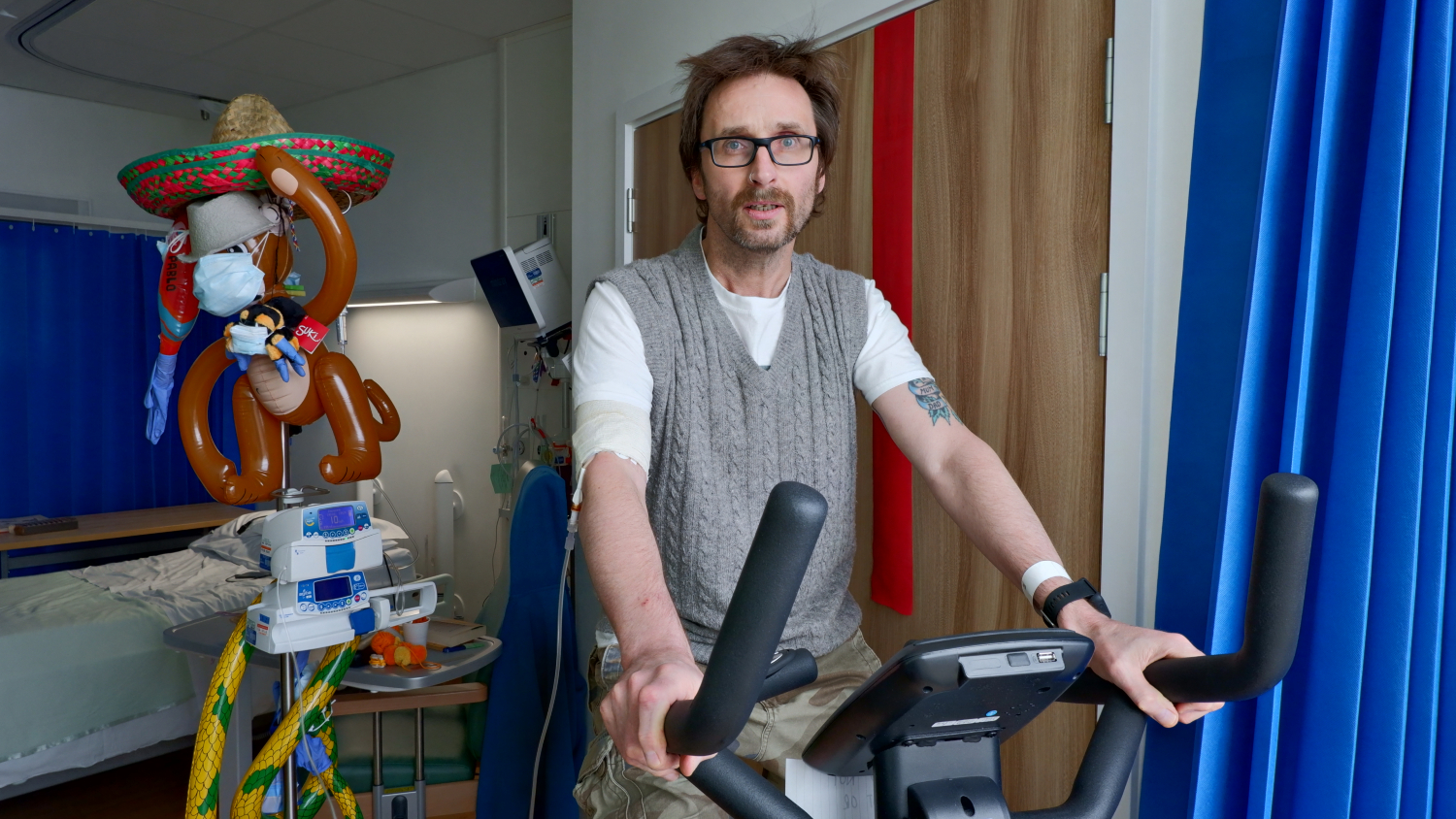 Richard cycled1,000 miles, the distance from Land's End to John o' Groats, while in hospital to raise money for Royal Papworth Hospital Charity.

“I got past that and the support from the staff has just been phenomenal. It’s kept me going at the most difficult of times."

To keep himself busy, Richard used one of the hospital’s exercise bikes to cycle from Land's End to Cambridge, a distance of 370 miles (595 kilometres), and then onto John o’ Groats, raising £3,700 to support the work of Royal Papworth Hospital Charity.

With the help of an occupational therapist, he also created a chess board so that he could play a virtual game of chess with his step son who lives in York, taking turns via video call. 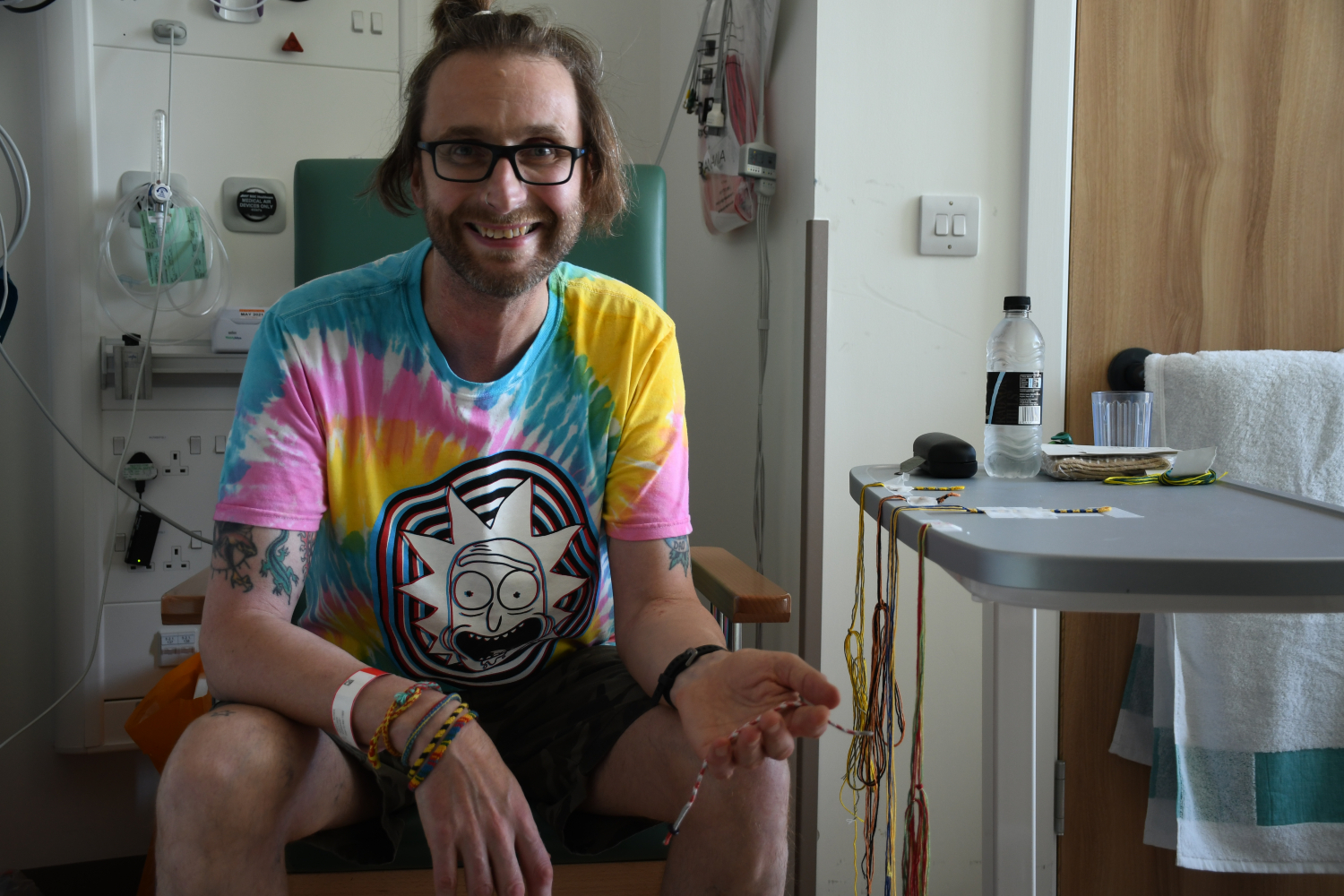 Following his transplant, Richard made friendship bracelets for staff who had been involved in his care.

As lockdown eased and transplant activity returned to normal levels, Richard got that call again; another suitable heart had become available thanks to the generosity of a donor and their family.

This time, the operation went ahead with Richard being wheeled into theatre one afternoon. Thankfully the surgery was a success and, after a brief stay in critical care, he returned to the same ward bedroom he had left a few days previously.

Almost 230 days after he was first admitted, Richard is heading home to see his wife and daughter

“I call it the penthouse suite,” he joked. “I’m on the top floor of the hospital, with a panorama of Cambridge, it’s quite something. I’ll miss that view. 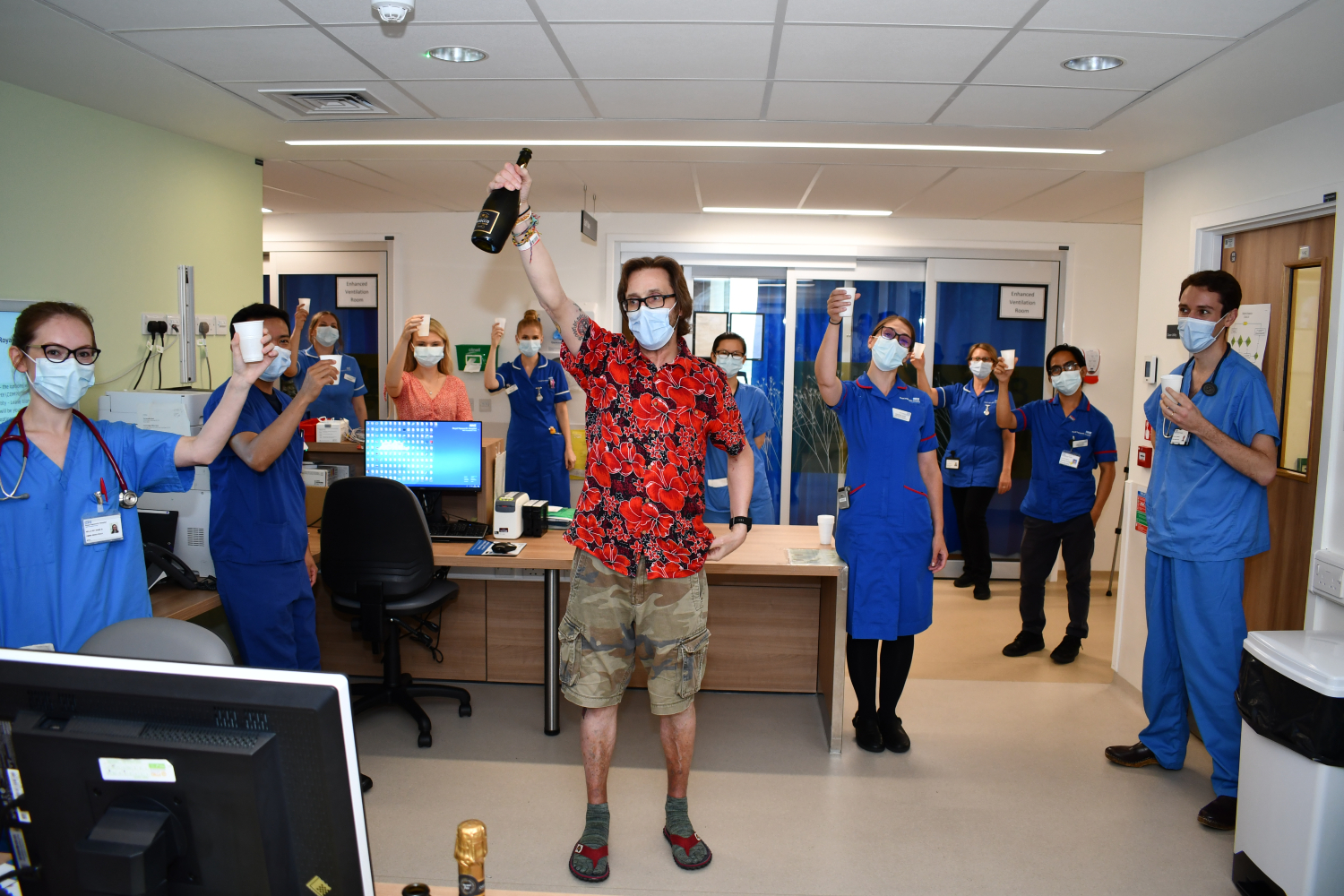 A socially-distanced leaving party was held on the ward on the day of his discharge from Royal Papworth Hospital.

“I’ll also miss the staff who have looked after me, frontline and behind the scenes. I’ve met so many different people here because I’ve been here so long. Their professionalism has made it feel like the pandemic has happened in another country!

“Everybody is so empathetic and they understand me more than I understand myself; I couldn’t have got through it without you people. 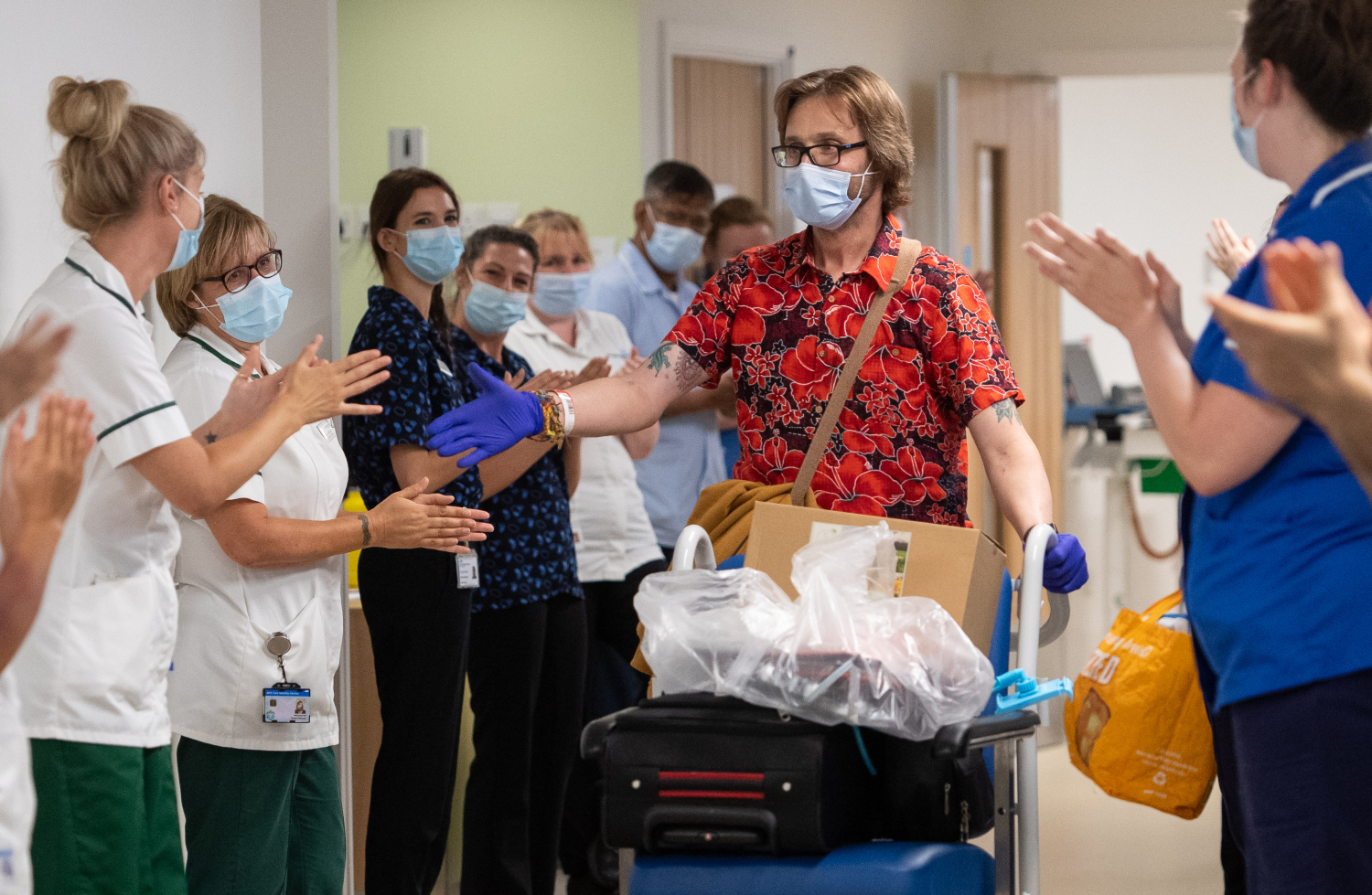 Staff cheer Richard out of the ward on which he spent most of his days in hospital. Credit: PA/ Joe Giddens

“But I am looking forward to being back home. I’ve missed my wife’s birthday, my daughter’s, my step son’s, my father’s, my brother’s and my sister’s. I’ve got a very different future now from what I was thinking of only a few months ago, and I can’t wait to begin this new chapter in my life.”

Now, 227 days after he was admitted, Richard is heading home. It wouldn’t have been possible without the gift of life: organ donation. 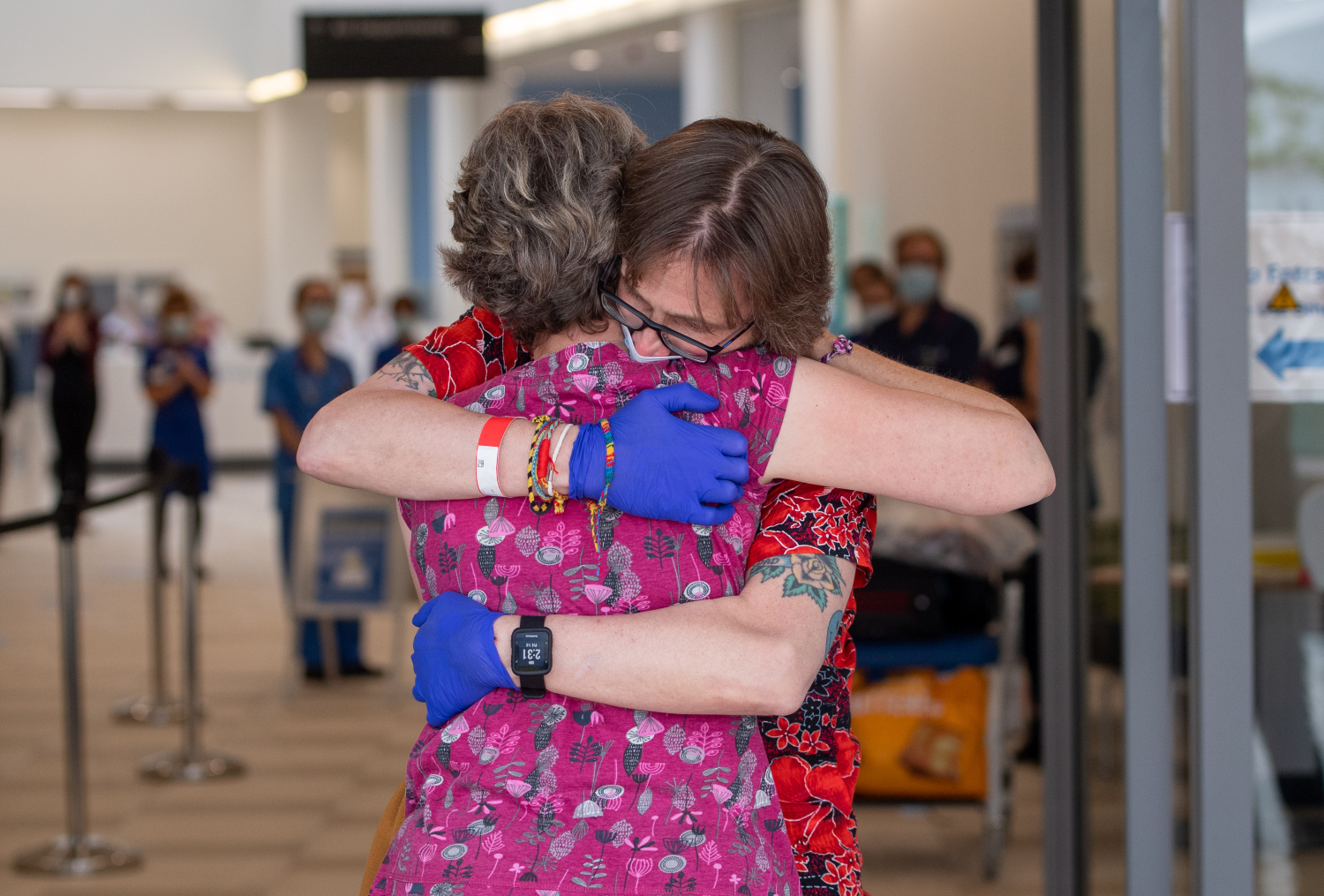 Richard was reunited with his wife Rachael, and is now looking forward to a fish and chip dinner and a small beer. Credit: PA/ Joe Giddens