The Institute will create the largest cardiothoracic centre for research, education, industry collaboration, and clinical care in Europe. 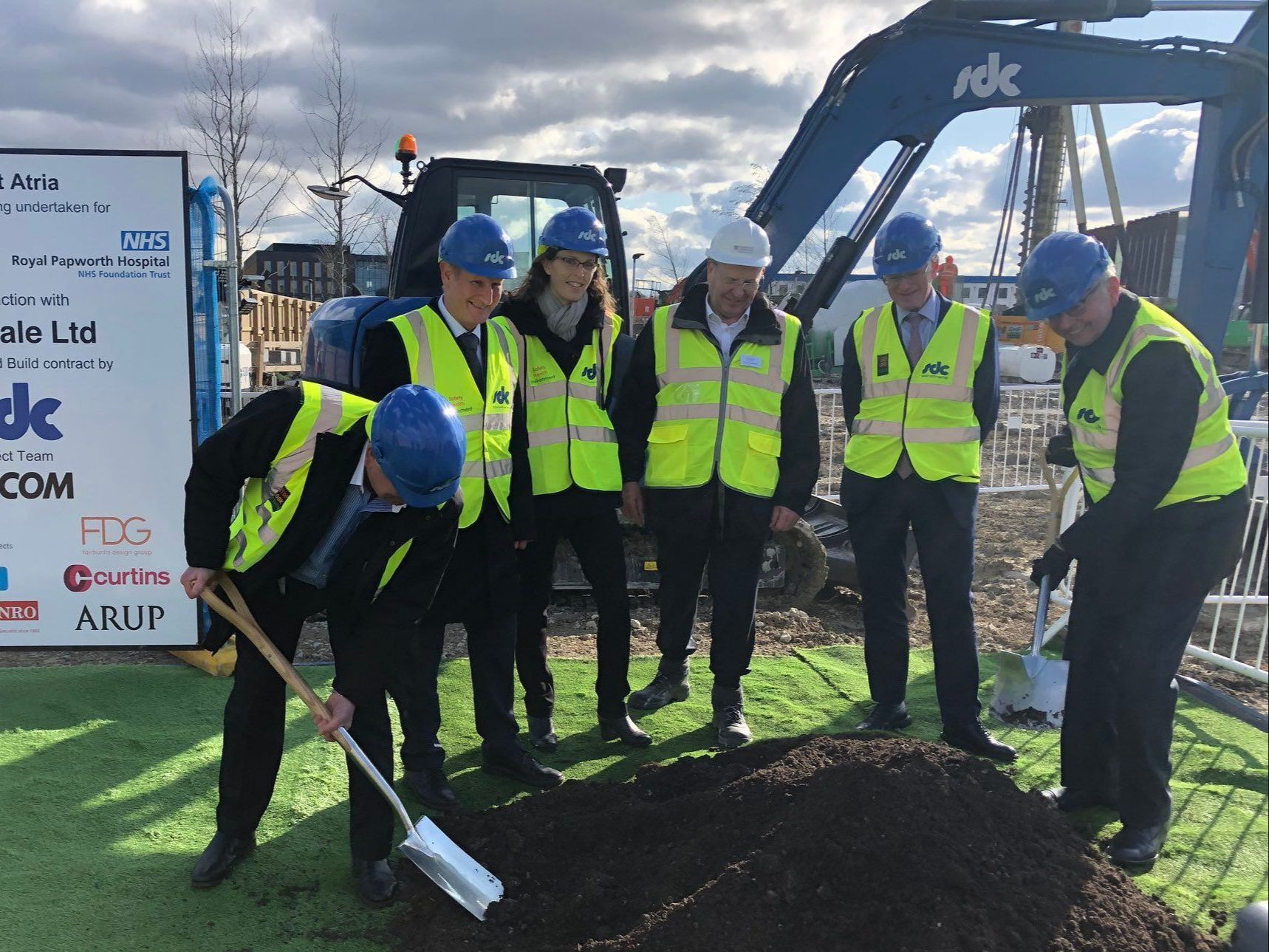 The University of Cambridge and Royal Papworth Hospital held an official ground-breaking ceremony at the new Heart and Lung Research Institute (HLRI) in Cambridge on Thursday 27 February.

The Institute is based on the Cambridge Biomedical Campus and will create the largest cardiothoracic centre for research, education, industry collaboration, and clinical care in Europe.

The HLRI, which is a joint venture between the University of Cambridge and Royal Papworth Hospital NHS Foundation Trust, aims to focus on collaboration between research and its clinical use in treating patients for chronic diseases such as heart attacks, cystic fibrosis, atrial fibrillation and pulmonary hypertension.

In the UK, one in every four deaths is caused by cardiovascular disease and 20% of deaths by respiratory disease. Despite a growing awareness of risk factors, such as smoking and poor diet, the prevalence of such diseases is increasing.

“The Heart and Lung Research Institute is an incredible opportunity to bring together the University’s expertise in cardiovascular and respiratory science and Royal Papworth Hospital’s expertise in treating heart and lung disease,” said Professor Nick Morrell from the University of Cambridge, who is Interim Director of the Institute.

“Heart and lung diseases affect many millions of people worldwide and the numbers are growing. Institutes such as ours, focused on these big health challenges, are urgently needed. The discoveries made by our researchers will deliver major benefits to the public through improvements in public health, new approaches to diagnosing and treating disease, and new medicines.”

Features of the Institute include: a new laboratory space; a clinical research facility; a collaboration space for link-ups between academia, healthcare providers and industry; and education facilities such as seminar rooms and a lecture theatre. It will also include a special 10-bed facility where the first-in-patient studies of new treatments can be conducted.

Professor John Wallwork, Chairman of Royal Papworth, added: “The Heart and Lung Research Institute will mean new treatments will be created, tested and delivered to tackle the biggest causes of premature death in the world all on one site. It will also allow us to provide much more education and training to clinicians tackling heart and lung disease worldwide.

“This will be a huge step forward and demonstrates one of the reasons Royal Papworth Hospital moved to the Cambridge Biomedical Campus – to collaborate with the best researchers in the world to help to save lives. Through the Heart and Lung Research Institute, we will be able to make even quicker progress in bringing tomorrow’s treatments to today’s patients.”

Read one father's story about the impact HLRI will have.

Funding for HLRI is being provided by the UK Research Partnership Investment Fund, which has contributed £30m, the University of Cambridge and the Wolfson Foundation. The British Heart Foundation has donated £10m towards the project and Royal Papworth Hospital Charity has launched its largest ever appeal to raise £5m.

Professor Wallwork added: “Every day at Royal Papworth Hospital we see the positive impact that research can have for patients with heart and lung disease, both in terms of improving life expectancy and quality of life. We have already received a number of generous donations from Royal Papworth Hospital patients and their families in support of the Heart and Lung Research Institute and will be working hard to raise additional funds over the next few years.”

Professor Sir Nilesh Samani, Medical Director of the British Heart Foundation said: “Through this funding we will help create a fantastic centre that will have a key role in driving forward our ambitious programme of heart and circulatory research. By bringing together world-leading scientists it will enable exciting opportunities for collaboration between researchers from different disciplines. And it will also accelerate the transformation of discoveries in the laboratory to treatments available at patients’ bedside.

“This grant is one of the largest the BHF has ever made and we have only been able to make this investment because of the incredible generosity of the public.”

The Cystic Fibrosis Trust has also committed to raise up to £5million to fund the Cystic Fibrosis Innovation Hub, which launched last year and will transfer to the new building once it has been completed. AstraZeneca will pursue integrated research programmes with the Institute to maximise translational impact.

Groundwork began back in October 2019 with construction starting in January 2020. Piling work for the 22m deep foundations is currently underway, including the formation of a tunnel, which will link the HLRI to neighbouring Royal Papworth Hospital.

There are currently 35 people working on the site with that number due to reach more than 150 at the peak of construction, which is set for completion in early 2022.