Mike was the 37th patient to receive a new heart through the hospital’s world-leading DCD programme. 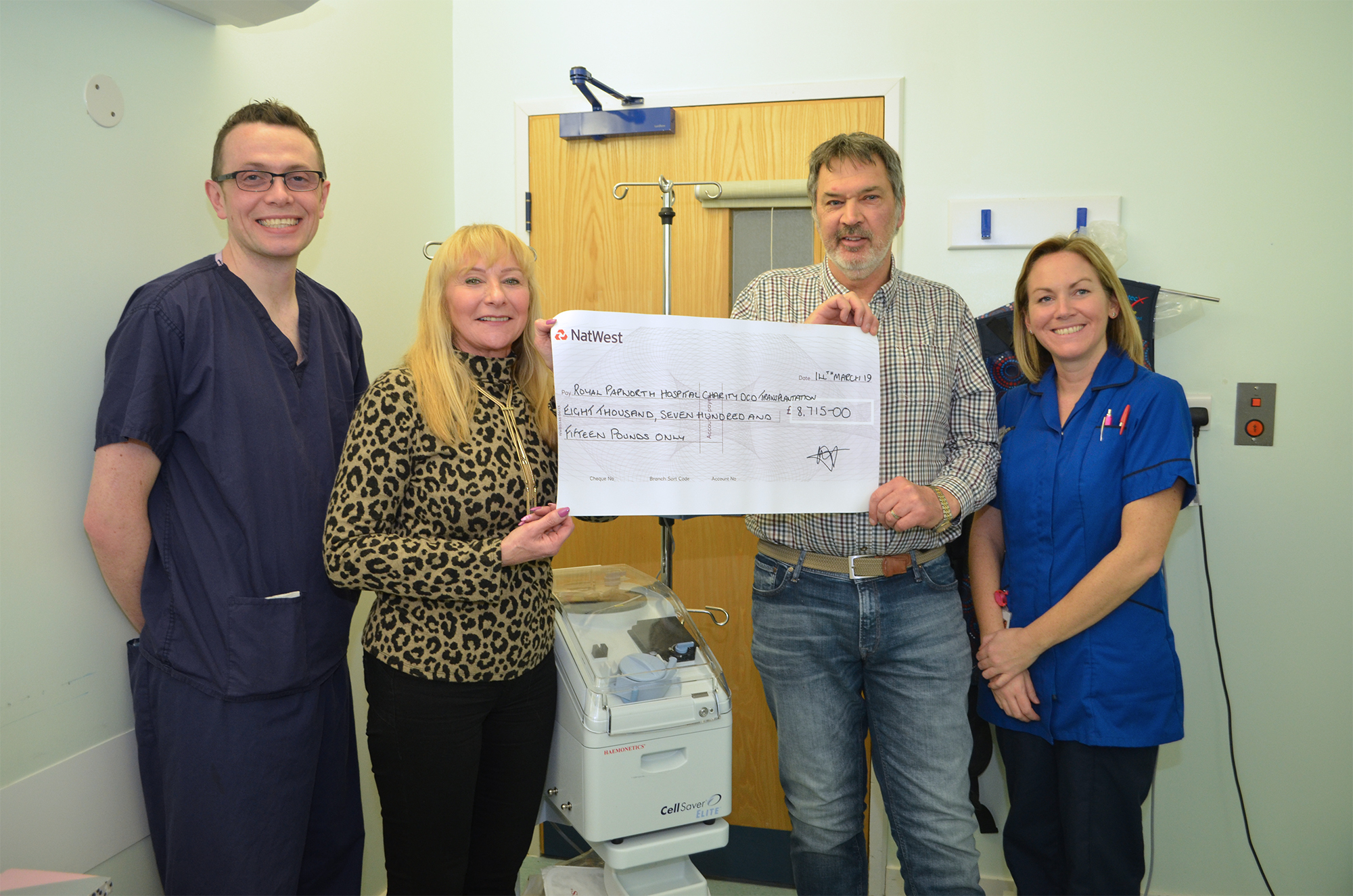 The Transplant team at Royal Papworth Hospital has been able to purchase a new cell saver machine thanks to a generous donation from a patient.

Mike Hawes, a heart transplant recipient, returned to the hospital last week to present a cheque for almost £9,000.

He was the 37th patient to receive a new heart through the hospital’s world-leading DCD (Donation after Circulatory Death) programme. Previously, surgeons were only previously able to transplant beating hearts from donors following the diagnosis of brain death (DBD).

Royal Papworth has now treated 62 patients this way, more than any other transplant centre in the world.

Mike, who lives in Earith, Cambridgeshire with his wife, Wendy, was diagnosed with a bicuspid aortic valve in September 2015 – a condition which can cause the heart’s aortic valve to narrow, reducing or blocking blood flow from the heart to the body.

He underwent two aortic valve replacements in two years, but complications meant that he had to come into hospital for a transplant assessment in October 2017.

Mike received his transplant on 17 November 2017 and, after four weeks of recovery, was able to return home just in time for Christmas.

“He wasn’t able to come back home after his assessment,” said Wendy. “He became more and more poorly and was eventually transferred to the Critical Care Unit. A week before the transplant, Mike was given six weeks to live.

Mike – who is a father of four and also has four grandchildren - added: “I am so grateful to all the staff, from the surgeons to the cleaning and catering teams.

“We really wanted to give something back so we spoke to the Transplant team about what they needed, which was a cell saver machine.”

Cell savers, which cost around £10,000, allow patients to receive their own blood back during an operation, meaning they may not require donated blood.

This type of transfusion has a number of benefits for both patients and the NHS, including; reduced risk of post-operative infection or reaction; protecting valuable blood bank stocks; cost savings, because donated blood is expensive; and is more acceptable to groups with religious or other objections to receiving someone else’s blood.

“This type of transplant means we can increase the number of donors available to us. Over the last four years, we have given life to 62 people who otherwise might still be waiting.

“Mr Hawes and his wife have made a huge contribution by raising money for this cell saver so we can continue to help patients in the future.”

Lead Donor Care Physiologist Jen Baxter, who works as part of the retrieval team, added: “It’s amazing to know that you’ve helped the patient and they’re now giving something back. It’s quite something – thank you very much.”