A team at Royal Papworth has become the first in the world to remove an entire lung using a pioneering surgical and anaesthetic technique. 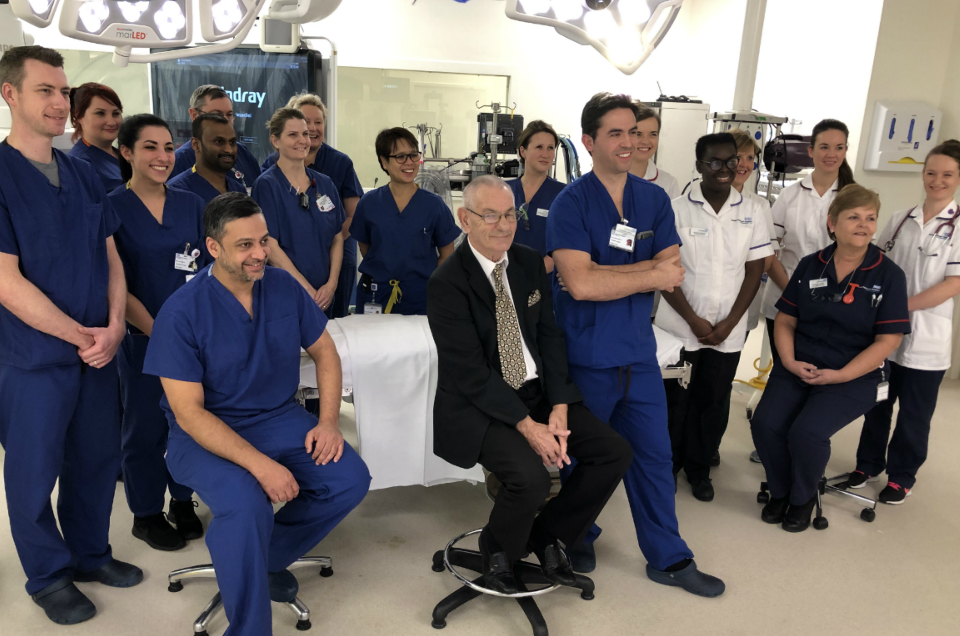 A team at Royal Papworth Hospital has become the first in the world to remove an entire lung using a pioneering technique.

The non-intubated subxiphoid pneumonectomy was performed in November 2019 to treat a patient with advanced, stage 3B lung cancer.

During the three-hour operation, surgical teams made an incision between the abdominal muscles (subxiphoid), removing the entire lung through the small cut of approximately 5 centimetres.

Meanwhile, the anaesthetic team controlled the pain through a non-intubated method, meaning the operation was tubeless and the patient kept spontaneously breathing on a gaseous mixture of oxygen, air and sevoflurane, free of opioids.

Performing thoracic operations in this way reduces the risk of respiratory complications and improves patient recovery time compared to surgical procedures that involve opening up the patient’s chest under general anaesthetic.

Mr Aresu said: “This patient had two tumours in his right lung - one across two lobes plus another tumour at the level of the upper lobe. Our only option to achieve a complete resection of the malignancy was to perform a pneumonectomy.

“Doing the operation using a subxiphoid approach – which involves a small incision under the ribcage and therefore completely avoiding the intercostal nerves - has the potential benefit of reducing the surgical impact, post-operative pain.

“We also used a non-intubated, opioid-free anaesthetic technique which further reduces the impact on the patient, making the recovery quicker and safer."

The patient was 74-year-old Raymond Page, a retired milkman from Peterborough, who admitted it felt “special” to be involved in a world first.

“I must admit that I was a touch apprehensive when I was initially being told about the technique and the possibility of being the first patient, but the team were brilliant at laying out all the options and I was happy to go ahead. They have done a marvellous job and I cannot thank everyone at Royal Papworth enough.

“I had the occasional bit of pain when coughing for the first day but that’s it really – I could walk and move about fine even just a couple of days afterwards which I really was not expecting.

“I was thinking that it might take up to 10 days to recover but I went home after six days and there was no pain whatsoever. I’m sure my wife of almost 51 years, Jo, and all my grandchildren will keep me on my toes as I continue my rehabilitation!”

Georgina Howell is one of nine thoracic oncology specialist nurses who look after lung cancer patients at Royal Papworth throughout their pathway, from initial investigation work through to discharge and settling in back at home.

“I saw Mr Page at his pre-op clinic and also went to see him in critical care after surgery and he looked amazing considering the short space of time since his operation.

“We provide a telephone link-line call to all patients once they have been discharged home to see how they are recovering and provide any advice if necessary. On the second call, just a fortnight after his operation, he was sounding remarkably well.

“It’s always rewarding for us as a team to know that we have played our part in helping our patients on the road to a full recovery.”